ANR-DFG Imageun – In the Mirror of the European Neighbourhood (Policy). Mapping Macro-Regional Imaginations (2020-2024)

ANR-DFG Imageun – In the Mirror of the European Neighbourhood (Policy). Mapping Macro-Regional Imaginations (2020-2024) 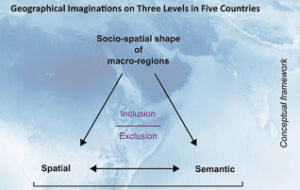 Transversal subjects concerned: Stabilities and fluidity of geographical objects; Data and protocols in the digital humanities

Description: The aim of this Franco-German research project is to analyse the specifically geographical dimension of the imaginaries that animate regional integration in this part of the world, by crossing the analysis of textual and iconographic corpuses, in order to identify and study the regions of the world to which the populations of five countries occupying different situations in the region feel they belong: Germany and France, Turkey, Tunisia and the United Kingdom.

From the 2008 economic crisis and its consequences to Brexit, through the rise of the extreme right in the member countries or the processes of political recomposition under way in its neighbourhood (Arab Spring, redeployment of the Russian pole, migratory flows in the Mediterranean), for the past decade, the project of political construction of a European region has been facing many challenges. As factors of uncertainty, they lead some to envisage alternative areas of political construction to the European Union (EU) alone.
The aim of this Franco-German research project is to analyse the specifically geographical dimension of the imagina-tions that drive regional integration in this part of the world. By combining the analysis of textual and iconographic corpora, it aims at identifying and studying the regions of the world to which the populations of five countries oc-cupying different situations in the region feel they belong: Germany and France, two countries generally considered to be at the heart of this part of the world, and three countries in more ambiguous situations, Turkey, eternal candidate to the EU often considered to be at the “gates of Europe” or “between three worlds” (Central Asia, Middle East and Eu-rope), Tunisia, located on the southern shore of the Mediterranean but in more than one way integrated into a large European region (functional, political, etc.), and the United Kingdom, historically oriented towards both the continent and the open sea, which now follows an unprecedented path of exit from the EU.

By distancing ourselves from a Eurocentric stance, which would consider above all these regional imaginations through the prism of ‘Europe’ alone, or even of the EU, the aim of this work is to analyse these imaginations as they manifest themselves in these countries, in their diversity and without a priori limits or scales (considering both continental-scale groupings, such as ‘Eurasia’, and regional sub-groupings, such as Scandinavia). Borrowing from critical political geo-graphy the idea that the analysis of political representations must involve the study of a plurality of discourses, associa-ting both elite and expert discourses and popular representations, this project aims to articulate different qualitative and quantitative methods (surveys by interviews, questionnaires, semi-automatic corpus analysis) to analyse three main types of discourse: drawn from surveys conducted among political decision-makers, or among students, or through the analysis of media corpuses (e.g. the press). More than a simple comparison between these discourses, the ambition of this project is in fine to analyse the circulation of geographical imaginations between them and the way in which they are structured.

More generally, by engaging the proponents of two currents of geography in the same consortium, “theoretical and quantitative”, and regional analysis on the French side and critical geopolitics on the German side, the theoretical objec-tive of this project aims to contribute to the analysis of macro-regions through the dialogue between these traditions which rarely work together for the study of the same subject.