Daily life in an urban village in Zhuhai, China 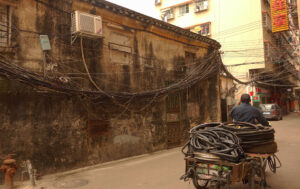 Chinese urban villages (chéngzhōngcū, 城中村), although spatially embedded in the urban fabric, retain their legal status as rural villages. The economic and infrastructural development of these villages, as well as the provision of public services, are therefore independent of municipal institutions.

Furthermore, the development of these villages does not meet the same procedures and regulations imposed by the urban planning system. This results in a chaotic environment, characterized by inadequate and low-quality public facilities, very dense and clustered buildings, and high population density.

In the picture, a migrant collected several now unusable tires. He will sell them to a waste disposal center. In the background, a late Qing-era building (1644-1912) with an air conditioner and a tangle of electrical wires.

This photograph can be seen in the exhibition Les métiers et la Recherche, work of collaboration between the CNRS and several research units, with the support of the Condorcet Campus. The exhibition, which will be held at the North and South Research Buildings of the campus from October 5th to 20th 2021, includes landscape photographs, documentaries, artistic or historical settings highlighting the professions of researchers in the humanities and social sciences.

Cinzia LOSAVIO
Cinzia LOSAVIO, is a Phd candidate at the University Paris 1, affiliated to Géographie-cités. Her thesis, entitled “Public policies and urban space: what role for Chinese migrant workers in the development of the middle-sized city in the People’s Republic of China”, is supervised by Natacha AVELINE, CNRS Permanent research director, and member of Géographie-cités. The photographs taken by Cinzia Losavio in Zhuhai and Guangzhou focus on the spatial, social and architectural complexity of urban villages, former rural spaces now embedded in the city and doomed to disappear.