European Memories of the Gulag

European Memories of the Gulag

5 September 2022|Calendar, In the spotlight, Mobilities and Territories, PARIS, Stability and Fluidity|

From 1939 to 1953, nearly a million people from the European territories annexed by the USSR were deported to the Gulag.
This publication is a compilation of testimony from former deportees, photographs taken during their lives, private and public archival material and films, collected by an international team of researchers.
The website links to a database of more than 180 interviews and is an invitation to explore the history of the Stalinist deportations via thematic and biographical presentations, research articles, and, in the immediate future, educational virtual tours, maps, and an illustrated timeline.

This website is trying out an alternative model of scholarly publication, aimed at researchers, teachers, and the general public. As a sort of “living book”, this type of publishing platform is able to regularly update its account of a research project’s findings.

Combining presentations intended for the general public with peer-reviewed academic contributions, the online platform is intended to provide both teaching material and discussion points for further research. Unlike publishing that presents a fixed state of knowledge, this dynamic form gives all users a vision of ongoing scholarship and reports on new approaches, including those that are still hypotheses subject to critical debate.

This platform arises from a research project that began in 2007 on forced population transfer in Stalin’s Soviet Union. The research was backed by CERCEC (EHESS and CNRS), Radio France Internationale and INED, and has already collected 200 accounts from former deportees to Gulag camps and Soviet “special settlement” villages, with photos, private and public archival material, and films. Many topics remain to be studied, particularly from the archives and testimony collected by Russian, East and Central European institutions. 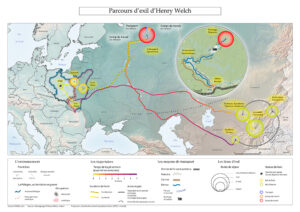 Deportations provoke estrangement, distancing and dispersion. From arrest to arrival, from life in exile to return, space, territory and time are intertwined.

The time of the journey, the time of exile sometimes interspersed with displacement, the expectation of return.

museum.gulagmemories.eu proposes an original cartographic approach. Produced in partnership with the UMR Géographie-cités, it mixes time and territory, space and distance. Two cartographies allow to enter into these representations:

Mapping trajectories of exile through time: the challenges

Produced in partnership with the UMR Géographie-cités (Trystan Viaud, as part of his master’s internship under the direction of Denis Eckert, Béatrice Von Hirschhausen and Sébastien Haule), these maps show exile trajectories and deportation sites, based on the accounts of deportees. Representing individuals on the move in a territory which, in the midst of the Second World War, is also on the move, posed a number of challenges in terms of research and methodology.

How to create a coherence between the representation of time and space?

To express duration, the visual variable “value” applied to a color gradient in linear implementation was chosen to convey the flow and succession of time.

For the construction of the map background, it was necessary to transform the narrative into coherent spatiotemporal units, by bringing maps and narratives closer and closer together, through their natural point of convergence: the place. Thus, the cartography seeks to reproduce, as faithfully as possible, the political boundaries and the railroad network of the time and their evolution during this period.

How to take into account the uncertainty of the data?

The maps do not reflect the uncertainty of the data. They use a representation that appears certain, while the information represented is sometimes uncertain. The routes appear to be detailed, suggesting that this is the actual route that the exile took, when in fact it is only a probable route that is most certainly close to the real one: the shortest route by rail between the place of departure and the place of arrival.

In a narrative, the space and time narrated may be blurred, and since they do not necessarily lend themselves to cartography, their transcription on the map may vary according to the interpretation of the cartographer. This poses methodological problems, but also has advantages: the map becomes a tool for analyzing the narratives and forces one to look for uncertainties in the narrative, but also for unexpected details.