For Ukraine – a scientific and solidarity event

For Ukraine – a scientific and solidarity event 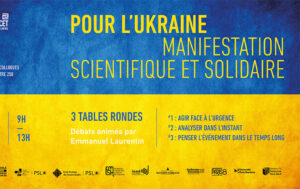 Denis Eckert, a member of Géographie-cités, will participate in this scientific and solidarity event dedicated to the war in Ukraine, on Friday, April 15, from 9:00 am to 1:00 pm, at the Centre de colloques du Campus Condorcet (Aubervilliers).

The event, aimed at students, but also at the general public, will feature 3 round tables with the participation of researchers from the Campus’ institutions from different disciplines in the humanities and social sciences.

The debates are moderated by Emmanuel Laurentin, producer of the program “Le Temps du débat” on France Culture, and are broadcast live on YouTube. Each round table, lasting about 50 minutes each, is followed by a moment of exchange with the public.

This day is as much an invitation to action as it is to analysis and reflection on the part of the student community and researchers in the
and social sciences:

1ST ROUND TABLE: ACTING IN THE FACE OF AN EMERGENCY

What help can be given to Ukrainian researchers and students? How to organize the reception within our institutions? What solutions can we invent together?

2ND ROUND TABLE: ANALYZING IN THE MOMENT

How to rely on human and social sciences to shed light on current events, with which sources? What documentation should we rely on? What relationships should be established with the media? What will be the consequences for scientific practices?

3rd ROUND TABLE: THINKING ABOUT THE EVENT IN THE LONG TIME

What historical, socio-historical and geopolitical contexts should be constructed to better understand the war? What does it mean to wrest the event from its urgency?