Land-based commons for housing in the Global South

Land-based commons for housing in the Global South 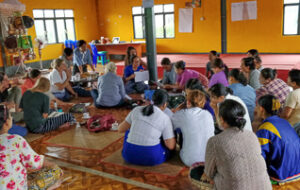 Description: To what extent can the commons approach contribute to the renewal of policies, programs and projects in the field of housing? What is the feedback from the field of collective, cooperative, or commoning housing projects in Global South’s cities?
While the notion of “commons” has been the subject of a remarkable resurgence of interest in the academic, operational and political world over the last ten years, little work has been done on the cities of the Global South and the precise ques-tion of land for housing. Yet access to urban land for city dwellers is a major issue, a determining factor in improving dai-ly living conditions and providing access to “adequate housing”, in the UN terminology, for the inhabitants of these rapid-ly growing cities. The dominant approach to urban land tenure, oriented towards individual ownership and the free mar-ket, generates speculative tendencies, land financialization and exclusion of the most precarious households. The critical force of the notion of commons opens up innovative ways to produce housing in the Global South, according to plural perspectives that are attentive to the needs and power to act of the inhabitants.

This research program, conducted by the UMR Géographie-cités, is carried out in collaboration with international re-searchers. It examines the implementation of (i) collective housing production, such as mutual aid cooperatives in Uru-guay, housing cooperatives in Burkina Faso, and a Community Land Trust in Kenya; (ii) socio-legal processes of collec-tive land claims (commoning), including collective mobilizations to regularize land rights in Bangalore and Nagpur in India, and collective acquisitive prescription in Brazil; (iii) development and real estate development projects on collec-tively owned land, such as developments on Kanak customary land in New Caledonia and on ejido land in Mexico.