Nicolas Verdier, visiting professor at the University of Chile

Nicolas Verdier, visiting professor at the University of Chile 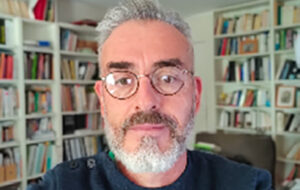 Nicolas Verdier will give a lecture in Santiago on 8 June on the theme: “The territory: the origins of a strong concept in French geography“. This presentation will review the history of the concept of territory in French geography, going through its origins, whether etymological or reused (ethology), then through its recent uses (the last thirty years), which make it a concept opposed to that of space.

On 15 June, he will give a lecture in Punta Arenas entitled “Projecting the reduction of the world: the case of the Suez Canal in the 19th century“. This presentation will focus on a “passageway of the world” created by and for Europeans: the Suez Canal. This moment of creation, the 19th century, is the one of the implementation of new utopias that allow to imagine a new form of globalization through technology. He will present these utopias and the way in which the canal is supposed to reduce the world, and for whose benefit this reduction is planned.

Nicolas Verdier is Director of Research at the CNRS and Director of Studies at the EHESS. His research falls within the framework of the intersection between territorialities in time and the epistemology of knowledge about spaces and territories, the two approaches forming two sides of the same questioning. One question guides this reflection: how do societies negotiate and renegotiate their relationships with spaces and territories over time? By mobilising two fields: the study of spatial recompositions and the epistemology of knowledge on spaces and territories, it proposes reflections on the temporalities of unification and territorial development, on the concepts of scale, hierarchy, network or memory, or even territory.

The objective of this programme is to initiate or develop scientific cooperation and relations between research centres and universities in the two countries, through support for joint research projects of excellence, involving the mobility of researchers (including post-doctoral students), with priority given to training at doctoral level.

The ECOS-Sud programme between Chile and France, initiated in 1993, has successfully contributed to academic exchanges, scientific production and the training of young researchers. It is financed by the Ministry of Europe and Foreign Affairs (MEAE) and the Ministry of Higher Education, Research and Innovation (MESRI) and managed by the French Committee “Evaluation-orientation de la coopération scientifique” (ECOS-Sud) on the French side and by the Agencia Nacional de Investigación y Desarrollo (ANID) on the Chilean side.

The multidisciplinary approach of the project, the emergence of new Franco-Chilean collaborations (thematic and institutional) and the participation of young researchers will be favourably perceived.

Chile was the first country to set up this programme in partnership with France.