Regioviz, a geovisualization tool to position the French regions in Europe

Regioviz, a geovisualization tool to position the French regions in Europe

20 May 2022|Data and Protocols, Making the city, PARIS, Publications|

Regioviz is an interactive geovisualization tool allowing territorial public actors to situate the demographic and socio-economic profile of French regions in relation to their European counterparts.

After showing how Regioviz fits into the field of geovisualization tools designed to facilitate territorial comparisons, this article presents its main functions. It highlights the choices made to adapt the application to users who are not familiar with multivariate geographical information dashboards.

After showing how Regioviz fits into the field of geovisualisation tools designed to facilitate territorial comparisons, this article, co-authored by Marianne Guerois, a member of Géographie-cités, presents the main functions of the application, insisting on its adaptation to users who are not, a priori, familiar with multivariate representations of geographic information. 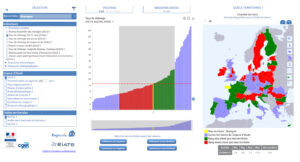 Indeed, by relying on the needs expressed by territorial actors, the choice of developing an ad hoc tool, such as Regioviz, makes it possible to orientate navigation using simple questions for observation (“what is the position of my region? which regions are most similar to it and according to what criteria?”) and to minimise training time.
The originality of Regioviz therefore lies not so much in the design of innovative visualisation and interactivity methods as in the approach to articulating these analysis functions within the same interface, meeting, a priori, the needs of the users.

Marianne Guerois is a lecturer at the Université Paris Cité and a member of the Géographie-cités laboratory. Her research topics are city systems, urban morphologies, urban mobilities, local territorial information and her privileged fields of investigation are France and Europe.