From the Middle Ages to the present day 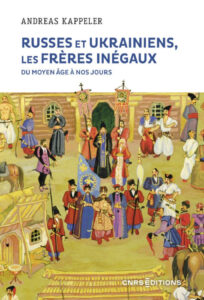 Since the annexation of Crimea and the outbreak of the Donbass conflict in 2014, Ukraine has consistently faced various forms of military pressure from Russia. The 2022 invasion is a testament to the Putin regime’s stubborn desire to put its western neighbor under tutelage, if not annihilate the Ukrainian state. The war, justified in Moscow by so-called historical necessities, is based on an imperial vision according to which Russia’s destiny is to control the territories around it.

A detour through history is necessary to expose this ideological edifice. Andreas Kappeler is a great specialist of the empires in Eastern Europe,
Andreas Kappeler analyzes here with finesse the evolution of the relationship between Ukraine and Russia since the Middle Ages. He shows us why the supposedly natural unity of the Ukrainian and Russian peoples is a myth. If the two peoples still fight over the heritage of the “common cradle” of the Rus’ of Kyiv, their trajectories differ from the thirteenth century. It is essential to return to the interactions and encounters between these “unequal brothers”, but also to the processes of distancing and construction of national identities, as well as to the memory cultures and differentiated political uses of history.

A long term perspective on the first European war of the twenty-first century.

This book, published in Germany in 2017 and several times republished, is translated for the first time into French by Denis Eckert, director of research at the CNRS and member of the Geography-Cities laboratory.

Andreas Kappeler, born September 20, 1943 in Winterthur, is an Austrian academic of Swiss origin, professor emeritus in European history at the University of Vienna. He is a member of the Austrian Academy of Sciences. Among his very important works, his Petite histoire de l’Ukraine (the French translation of which was published in 1997) is a reference work.

Denis Eckert, geographer, is currently a member of the French-German ANR/DFG project LimSpaces – Living with uncertainty. Strategies of adaptation and horizons of expectations in Ukraine and Moldova