The cacophony of Donbass

The cacophony of Donbass 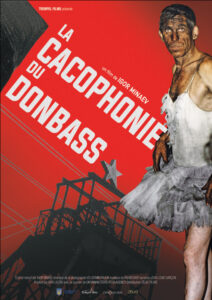 As an echo of the war in Ukraine and as part of the ciné-club, Igor Minaiev’s documentary, The Cacophony of Donbass (2018) will be screened on Wednesday, March 23 at 6:30 pm at the Marc Bloch Center in Berlin. The film will be introduced by Sonia Combe and discussed by Catherine Gousseff and Denis Eckert, director of research at the CNRS, member of the Geography-Cities laboratory.

The war in Eastern Ukraine has made this region, once very well known, especially thanks to the film The Donbass Symphony by Dziga Vertov, participate in the construction of a myth of heroic miners. This is the story of a decline and a century of relentless propaganda, where a symphony turns into a cacophony.

Born in 1954 in Kharkhov (Ukrainian SSR), Igor Minaiev is now French. Determined from the beginning to evolve in the artistic world, he entered the National Institute of Theatre and Arts in Kiev, then began his career in Odessa, at the time of Perestroika. This period of his life is represented in two of his feature films: ‘Mars Froid’ and ‘Rez-de-chaussée’, both selected for the Directors’ Fortnight in Cannes. At the end of the 1980s, the filmmaker moved to France, where he worked on three films: ‘L’Inondation’ with Isabelle Huppert, ‘Les Clairières de lune’, produced by Joël Farge and ‘Loin de Sunset Boulevard’, a historical film. In addition to his film career, Igor Minaiev also creates shows, including ‘Les Nuits florentines’ after Tsvetaeva, and teaches at the Femis, a prestigious Parisian film school.

Denis Eckert, a researcher at the CNRS since 1994, has held positions in various research centers in France (Montpellier, Toulouse, currently Paris-Condorcet) and in Germany (Marc Bloch Center, Berlin, 2016-2019). He was also a visiting fellow in Moscow (Institute of Geography of the Academy of Sciences, 1997-1998), in Montreal (CIRST, 2015) and in Leipzig (Leibniz-Institut für Länderkunde, 2015-2016). Director of the UMR LISST (Toulouse Jean Jaurès University) in 2011-2015, and president of section 39 (Spaces, Territories, Societies) at the National Committee of the CNRS (2012-2016), he also directed for 12 years (2005-2016) the online journal Mappemonde devoted to the question of images and maps and their uses. His work on Eastern Europe, its borders and regional dynamics, led him from Russia to Ukraine. He is currently a member of the French-German ANR/DFG project LimSpaces – Living in the in-between: adaptation strategies and expectation horizons of ordinary actors in Ukraine and Moldavia.