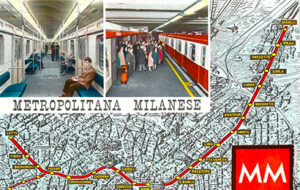 Barbara Carnevali (EHESS- CESPRA) will speak on Thursday, April 14, 2022 as part of the seminar “Geography and Social Sciences” directed by Marie-Vic Ozouf-Marignier and Nicolas Verdier,

What does a metro do to the city? The question is almost rhetorical, since “the metro,” an apocope of “metropolitan” (railway), is both a synecdoche and a symbol of modern urban life.

A metro line redesigns the city and radically transforms its spatio-temporal coordinates. It reconfigures space around poles separated by a “string” of stations, places defined primarily according to changing criteria of an economic, political or cultural nature. In this new artificial and homogeneous space, a new temporality begins that changes the experience of distance and modulates the inner experience of city dwellers.

The metro is the medium par excellence of the urban experience: it transforms the perception and knowledge of places, the rhythms of life, the dialectic between familiarity and disorientation. To take the metro, one must learn and incorporate new gestures and habits, reconfigure sensory perception and sensitivity (disorientation, perception of unevenness, noise and darkness), and adapt to a new lifestyle characterized as much by “offloading” as by hyperesthesia and stress. A metro, moreover, constitutes a symbolic system in its own right: for both city dwellers and tourists, the metro map often coincides with the “image of the city”, while the toponymy of stations creates an urban mythology charged with collective and individual memories in constant evolution.

In my talk, I will address some of these issues through the analysis of a concrete case study, that of the first Milanese subway line, familiarly known as the Red Line. Designed in the 1950s as a symbol of the post-war reconstruction and economic boom of which Milan was the epicenter, it was inaugurated in 1964. Through its engineering project and its modernist design inspired by the “project culture”, the Red Line is a key to access the issues of urbanization of the last century and to the study of metropolitan social aesthetics.