The UMR Géographie-cités has welcomed 71 researchers, 67 of whom came from abroad, as guests since 2007.

Most Guest Researchers have spent 2-6 months within the framework of ANR projects or other collective projects (5 researchers) or bilateral international projects such as the PUF Partner University Fund with the United States (5 researchers). Others have been hosted as Visiting Professors by one of the two supervising universities (4 researchers).

Those who have stayed for a longer period, one year or more, are junior researchers having for example obtained a thesis grant (Mexico), or Guest Researchers invited by the City of Paris to work on the city itself, or who obtained a delegation at the CNRS.

Ties with these researchers remain after their departure from the UMR and ongoing relationships with UMR team members have resulted in a number of co-published articles. 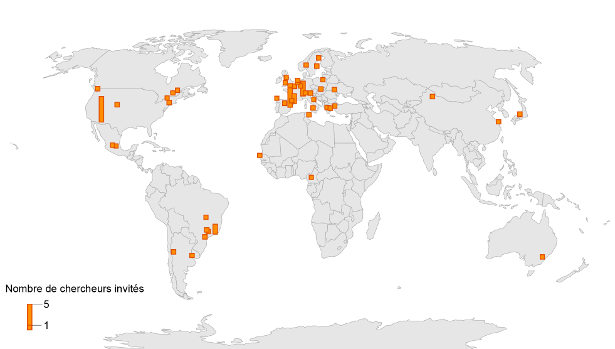