23 January 2023|In the spotlight, PARIS, Publications|

How Will the Industry Benefit? 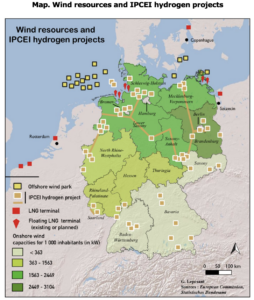 “Deutschland – Einstieg in die Deindustrialisierung?” – “Germany, the beginning of deindustrialisation?” asked the German economic newspaper Handelsblatt in the context of the spike in energy prices that has put at risk thousands of companies across Germany in 20221 .

Whereas some sectors such as steel, glass and chemicals have been seriously hit, the manufacturing industries operating in the areas linked to the energy transition (such as renewable energies and hydrogen production) should benefit from decisions taken to reach climate neutrality. The level of ambition of the Federal government has indeed dramatically increased with the new coalition elected in 2021, the share of renewable energy sources (RES) to be reached in the power mix by 2030 being set at 80% (against 47% in 2022). Will the German industry benefit from the ambitious commitments agreed by the new coalition?

The boom and bust of the solar sector in 2011 are a reminder that a strong internal demand does not necessarily translate into strong and resilient supply chains on the national territory. In the context of generous support schemes, several companies emerged in the 2000s benefiting from the strong demand for solar panels before being overwhelmed by Asian competitors. Nowadays, more than 90% of solar panels are imported from China.

“Significant new solar and wind capacities should contribute in a near future to the production of green hydrogen and the related equipment. The country plans to establish up to 5 GW of generation capacity including the offshore and onshore energy generation facilities needed for this. An additional 5 GW are to be added by no later than 204018. Several State governments also have defined hydrogen strategies or roadmaps, especially those where the RES potential is the most significant, which could trigger some new dynamics regarding the industrial geography of the country.”
Gilles Lepesant