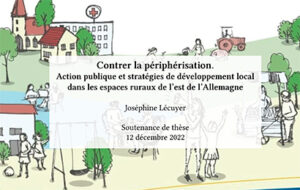 Joséphine LECUYER, Ph. D. Student at the University of Paris 1 Panthéon-Sorbonne and member of the UMR Géographie-cités, will defend her thesis

This thesis aims at analysing the complexity and ambiguities of the logic, projects and actors of local development in “peripheralised” German rural areas. “Peripheralisation” (Peripherisierung) refers to a process in which migration deficit, economic weakening, political dependency and stigmatisation interact. The objective is to understand to what extent rural development policies implemented at all levels aim to counteract peripheralisation, while sometimes increasing territorial inequalities between peripheralised areas. This work is based on a cross-case analysis of three LEADER regions in Mecklenburg-Vorpommern, a Land marked by all four dimensions of peripheralisation. Drawing on statistical, cartographic and discursive analyses, the thesis is organised into two parts.

The first part draws up an analytical inventory of the demographic shift and the different types of peripherality in Germany, using quantitative and qualitative approaches at several scales. It shows that the rural areas of Northeast Germany combine all aspects of peripheralisation, while being marked by different degrees of peripherality. The second part highlights the complex system of stakeholders and regulatory measures set up to strengthen the development of rural areas. It also evaluates the extent to which local stakeholders seize these policies and implement strategies to circumvent or even instrumentalise the tools at their disposal.