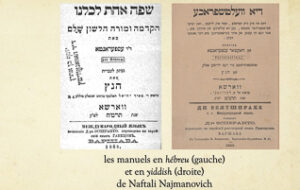 Transversal subjects concerned: Data and protocols in the digital humanities

Description: As soon as Esperanto appeared in 1887, its promoters developed a multilingual propaganda to popularize this “international language”. The project is to digitize the booklets published in several “natural languages” between 1887 and 1892 to promote Esperanto, documents scattered in European and Israeli libraries, and thus constitute a corpus for the analysis of the early diffusion of the Esperanto idea.

Esperantism has been characterized, from the beginning, by an active multilingual propaganda: its promoters had to describe the new language and explain the project in as many languages as possible, in order to reach a truly international public. Thus, between 1887, when the first four explanatory brochures were published (in Russian, Polish, French and German) and 1890, thirty-six works written in sixteen different languages were published.
It is therefore this phenomenon of the diffusion of the Esperanto project via brochures published in the “native languages” that we wish to document with precision. This corpus is certainly far from being unknown. We know with great precision the list of printed materials published from 1887 onwards. In fact, from the very first years, the Esperantists compiled a detailed catalog of the publications recognized by the movement, assigning them a serial number that was in principle invariable. By the end of 1892, fifty-nine different works (books, pamphlets, booklets) had been published and approved by L. Zamenhof. Copies of all these documents were kept in Warsaw for several decades, until the destruction of the Second World War. Some of the documents are written entirely in Esperanto and, as such, do not form part of the core of the corpus. But the vast majority are written in the existing “natural” languages, and the comparative analysis of their contents would make it possible to document the effort of diffusion made in the direction of the international public, as well as the work of adaptation and explanation of the Esperanto project according to the supposed specificities of the target linguistic communities.
We wish to constitute a digital corpus of all the Esperanto documents from the period 1887-1892. The initial phase is therefore that of digitization. The accessibility of the 59 documents considered is very variable:
– A very significant part of them (40) is in the collection of the Austrian National Library, but not all are digitized
– four documents are currently unlocatable,
– eleven pamphlets already located need to be digitized in high definition.
After the digitization phase, a complete cataloguing of the collected documents will be carried out. The idea is to create a meta-catalogue that will allow us to locate the original copies that have been digitized, with permalinks and, if necessary, direct access to the digital copies offered by the libraries. This metacatalog will be deposited on HAL-SHS and integrated into the Esperanto-Historio collection. We will also propose to enrich it step by step in the following years in collaboration with the Austrian National Library, in connection with the curator of the Department of Planned Languages. It would also be very interesting to gradually locate all existing copies of the booklets belonging to public libraries: these are generally very rare documents.