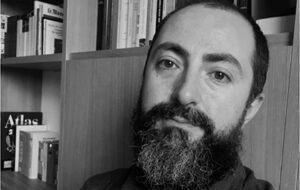 Around the “dividing line”. The border space of the Basque Country in the age of nation-states (1780-1920)

From a micro-analytical and spatial perspective, the aim was essentially to probe this terrain through the phenomenon of rupture in the contiguity created by an inter-state discontinuity. But the study of the delimitation (drawing a linear figure on a map), the demarcation (making a demarcation) and the governance of this space will have been only a necessary pretext, intended to reduce the opacity of the social and to bring to light the powerful border habitus that the populations of the Basque Country have forged over time.

Thanks to a methodical wandering in numerous archives and to a relentless reading of works on border spaces from all over the world, I have noticed that the border works were abnormally long in the western part of the Pyrenees and in the northern part of the Spanish-Portuguese border in the 18th and 19th centuries. The inhabitants of these rural areas proved to be formidable negotiators of interstate boundaries.

Why these borderers? Because, since the Middle Ages or the beginning of the modern era, the borders are very stable. Now, this border habitus is formed like a concretion, by slow contributions of materials. For all that, it is not a question of claiming that this habitus does not exist elsewhere. But in the Basque Country and Galicia, it has been consolidated over a long period of time. Finally, it should be emphasized that the border habitus is expressed in at least three different ways. It is a question of knowledge and skills in the field of border negotiations, of the deep incorporation of the geopolitical rupture in the practices of the populations and of the multiple forms of shifting intended to take advantage of ambiguous positions that the inter-state caesura induces.

For those who cannot attend, this seminar will also take place via zoom. To obtain the link and access codes, contact nv ( at ) parisgeo.cnrs.fr