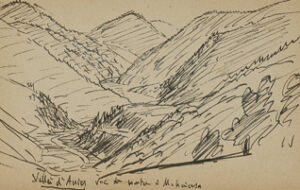 Transversal subjects concerned: Mobilities and territories: towards a relational approach to space; Stabilities and fluidity of geographical objects; Urban fabrics: processes, actors, practices; Data and protocols in the digital humanities

In its phase 1 (2017-2020), the “Corpus Emmanuel de Martonne” project enhanced geographic archives of a variety of types, partly already digitized: 7 field notebooks (out of the 27 notebooks digitized by the Sorbonne library and published in its NUBIS digital library), were transcribed on the collaborative online transcription platform Transcrire (headed by Fabrice Melka, IMAF, CNRS), enriched with metadata (Dublin core) and 800 glass plates relating to Central Europe among the E. de Martonne photographic collection digitized at UMR PRODIG have been documented, enriched with metadata (Dublin Core) and placed in the open MediHAL archive after having been appraised and validated by UMR Géographie-cités.

A prototype storymap entitled “In the footsteps of Emmanuel de Martonne: 3rd excursion Romania, 1921” was developed within the ImaGEO consortium on the navigae cartographic research and visualization platform (whose manager is Shadia Kilouchi, UMR Passages, CNRS): this prototype traces in the form of a dynamic cartography the plausible itinerary of E. de Martonne in the field at the same time as the double-pages of his field notebook scroll.