The seminar will be an opportunity to listen to and discuss with members of Géographie-cités: Adrien Doron and Hugues Pecout. 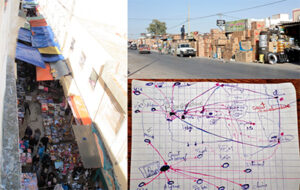 The geography of supplies to Tunisian popular markets of commonplace consumer goods imported from global – especially Chinese – trading places is particularly labile. The spatial and temporal variations in the routes taken by goods can be explained by the dependence of traders’ supplies on customs barrier circumvention schemes, which themselves are affected by the political change that occurred in 2011 and by the uncertainties of the post-revolution period. The observation of the constant recomposition of the supply modalities and the routes taken has allowed the updating, from a multi-sited ethnographic approach, of a network of markets structuring the commercial circulations.
On the basis of these results, the proposal consists in contributing to the renewal of the framework of analysis of trade flows in the South by building a network approach to the structuring and recomposition of trade routes. This approach mobilizes the theoretical and methodological tools of sociology and social network analysis in order to formalize the analysis of the networks evoked in the ethnographic surveys and to experiment with an analysis of spatial networks structuring the circulation of goods.

Engineer in geographic information science at the CNRS for 10 years, I have gradually converted my GIS skills to R programming. This allowed me to go beyond the perimeter of geomatics by initiating me for example to network analysis, textual analysis or web scraping. It also led me to discover the notebook publication format which allows to mix natural language and computer language and which, combined with the paradigm of literate programming and the use of Git, offers an efficient basis for open science and reproducibility. I try today to transmit my accumulated knowledge in this domain in the framework of my collaborations, trainings or via the Rzine project which offers a publication space in notebook format.