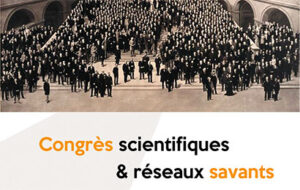 The study day Scientific Conferences and Scholarly Networks organized on December 8, 2021 at the Condorcet Campus was held in the amphitheater of the Maison des Sciences de l’Homme (MSH Paris Nord).
A part of the audience followed the day online. This day was supported by the GIS Réseau URFIST (NETCONF project) and the Transversalité Données et Protocoles dans les Humanités Numériques of the Géographie-cités laboratory.

Through its interdisciplinary program, the day proposed to apprehend scientific congresses and conferences as both geographical and disciplinary spaces of knowledge circulation. Emphasis was placed on the methods available to study data on participation in events, noting that unlike the study of documentary and bibliographic corpora, which benefit from well-stabilized methodologies, the study of scientific events is less well defined.

Different approaches have been approached: ethnography, analysis of networks of co-participation, content analysis, work on archives. By bringing together historians working on congresses from the turn of the 20th century with sociologists and geographers working on congresses from the second half of the 20th century and today, the day brought out similarities but also differences in approaches, types of sources, questions and methodological obstacles. A transversal reflection on the role and the future of these events punctuated the exchanges.

A report of the day by Mégane Fernandez et al. is available online on HAL. The slideshows and summaries of the presentations are available on the Netconf website.