The metabolism of the Parisian agglomeration 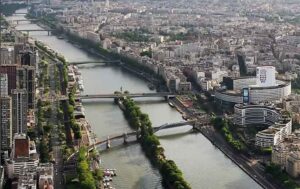 The Seine basin is deeply marked by the presence of a metropolis that has had more than one million inhabitants for nearly two centuries and now has nearly 11 million inhabitants. The development of the Paris metropolitan area is inseparable from the specific environment of the Seine basin, which for a long time provided it with water, energy and building materials. In return, the metropolis has been at the origin of major transformations of the basin and particularly of the aquatic environments.

Even today, despite the weakening, even the rupture, of certain functional links between Paris and its basin – in particular in terms of food and energy – the relations that unite them remain decisive, in particular through the water that the agglomeration consumes and whose quality depends to a large extent on urban and agricultural activities: the water that carries sand, gravel, cereals, the water that sometimes constitutes a threat for the city dwellers who consume it. In the future, depending on the choices made by human societies and on the environmental changes they undergo or choose to undergo, Paris will be able to strengthen the synergies with its basin or turn away from it even more.

Professor of urban planning at the University Paris 1 Panthéon-Sorbonne, member of Géographie-cités, Sabine Barles has been a member of PIREN-Seine for over twenty years. She works on environmental history and the socio-ecological trajectory of the Seine basin and is currently co-leader of one of the research axes that deals with this theme of socio-ecological trajectory.