The path of urban development in Datong (China) 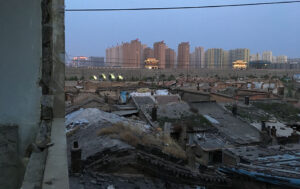 This photograph is taken from a half-demolished building in the city of Datong, Shanxi Province, China.
In the foreground, the old city is half demolished as a result of Mayor Geng Yanbo’s unfinished development plan.
In the background, the new and largely empty real estate building, intended for the arrival of Beijing buyers after the development of the Beijing-Datong high-speed train line (2 hours instead of 16 hours).
Between the old city and the newly built one, the Datong walled enclosure, a copy of the original one from the Ming period.

Cinzia LOSAVIO is a Phd candidate at the University Paris 1, affiliated to Géographie-cités. Her thesis, entitled “Public policies and urban space: what role for Chinese migrant workers in the development of the middle-sized city in the People’s Republic of China”, is supervised by Natacha AVELINE, CNRS Permanent research director and member of Géographie-cités.

The photographs taken by Cinzia Losavio in Zhuhai, Guangzhou or Datong, as part of the Medium project “New pathways for sustainable development in China’s medium-sized cities”, focus on the spatial, social and architectural complexity of urban villages, former rural spaces now embedded in the city and doomed to disappear. Several of Cinzia Losavio’s photographs were on display at the CNRS exhibition Les métiers de la Recherche, at the Condorcet Campus from October 5 to 20, 2021.

Natacha Aveline-Dubach. Pathways of sustainable urban development across china the cases of hangzhou, datong and zhuhai. HAL, 2019. This ebook, published as a result of the Medium project, contains a chapter on Datong (written by J. Audin) and a chapter on hukou policies in Zhuhai written by Cinzia Losavio.

The chines Mayor (by Hao Zhou), documentary film by e Hao Zhou, made about the mayor of the city of Datong, Geng Yanbo
Synopsis
Once the flourishing capital of imperial China, the city of Datong is now almost in ruins. In addition to being the most polluted city in the country, it suffers from an aging infrastructure and questionable economic prospects. The mayor, Geng Yanbo, wants to change all this and announces that he has a project to return Datong to the status of a cultural haven that it had some 1,600 years ago. Such declarations are not without a price, however: thousands of homes must be demolished and half a million residents (30% of Datong’s total population) are forced to move during his mayoralty. The success of his project depends entirely on his ability to appease the angry masses of workers and the elite, increasingly disturbed by his ideas. “The Chinese Mayor” depicts with remarkable simplicity a man and by extension his country in a frantic race towards an uncertain future.
Awards
2015 : Sundance Film Festival – Utah (USA) – Official Selection
2015 : Millenium – International Documentary Festival – Brussels (Belgium) – Millenium Silver Lens – Best Development Message Award