The world seen from Kazakhstan ; exploration of world representation from an in-between space

The world seen from Kazakhstan ; exploration of world representation from an in-between space 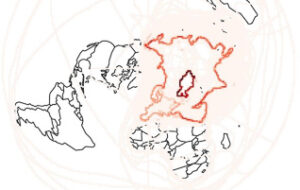 Description: A previous survey (EuroBroadMap, 2009-11) concluded that Central asia was a blind sport in mental representation of world regions. This result could be explained by a methodological bias: the drawn regions are centered on the respondents, yet no survey had been carried out in Central Asia. To answer this question, the survey was replicated in 2018-19 in Kazakhstan.

The expression “Central Asia” is used to named different entities depending on the periods and approaches. For 25 years, the region has experienced significant changes (national affirmation, regional disintegration, global integration, etc.) which have transformed the regional spatial organization (Thorez, 2011, 2015). The uncer-tainties on the geographical definition of Central Asia persist and give the region a particular interest in the study of mental representations of the world. A previous research project (“EuroBroadMap” project (FP7)) im-plemented of a worldwide survey on representations of world regions. The main results show the existence of “hard” structures (strongly anchored in the representations) and “soft” structures, whose semantic definitions and contours may vary (Didelon, Lambert, de Ruffray 2017). Those results reveal the existence of in-between spaces located on the borders of regions and belonging to two or more regional structures. Central Asia is part of these interstitial spaces and is often shared between several regions (Europe, Asia and the Russian Federa-tion). It is one of the least determined spaces in representations of the world, one of the areas of multiple be-longings, when viewed from the outside. However, this project also showed that, even on a global scale, spa-tial representations of world regions are centered on people. The existence and delimitation of the areas men-tioned could therefore be due to a methodological bias: no survey having been carried out in Central Asia.

Based on those theoretical conclusions, we can hypothesize that a survey conducted in Central Asia should show the existence of a “hard” region in the representations of the populations surveyed. This would raise questions about its spatial extension, the countries it would include, the fuzziness of its boundaries and the name (or names) that would be given to it. It would also raise geopolitical questions if this representation en-ters into contradiction with the representations of the populations of the neighboring regions surveyed (China, European Union, Turkey, Russia). On the contrary, its absence would raise sensitive theoretical questions in the field of mental representations, by questioning the principle of centrality mentioned above. Moreover, if this space was not identified as a region but shared between neighboring regions, which one would be dominant (Asia? Europe? Russia?) and what factors could explain it?

Our goal is to test the existence of this region in mental representations by doing a survey in Kazakhstan. Work-ing in Kazakhstan makes it possible to tackle the question of representations of regional space at different scales, as the Kazakh authorities, who present their country as an interface, support the dynamics of regional integration. Working in different cities of this large country will also allow us to assess the heterogeneity of representations at the national level. In order to make comparisons with the results of the EuroBroadMap pro-ject, the survey method will be similar and the questionnaire used will be largely similar. The same type of sam-ple will be surveyed: undergraduate students in several cities with different socioeconomic characteristics likely to influence the representations of the respondents.
For the analysis, the same methods principles will be used to ensure the comparability of the results. However, one of the objectives of this project is to go beyond methods used in EuroBroadmap by implementing a pro-cess, which will allow rapid and flexible production of analytical maps. This will be done in a coherent software environment (R) placing our work in a reproducible research approach.

The scientific results expected from the realization of this project are threefold.
– Techniques and methodologies: produce a tool to digitize and analyze mental representations more quickly and more flexibly. This survey will build on the experience gained in EuroBroadmap and will serve as a method-ological test prior to carrying out larger surveys in other regions.
– Theoretical: confirm or refute the principle of centering maps on a global scale, even in regions generally perceived as in-between and fuzzy, or even not perceived.
– Thematical: if a Central Asian region was identified, analyze it and show how it could oppose to other repre-sentations of the World, in particular those of students from neighboring countries. We can also make other hypotheses: the contours of Central Asia vary considerably from one city in Kazakhstan to another, with strong differences between regions with a large Russian-speaking population and others.