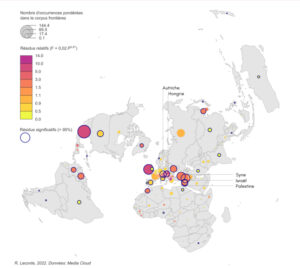 Covering the borders of the World.
Media coverage of borders and the geopolitical agenda of the European press

Romain LECONTE, Ph. D. Student at the Université Paris Cité and member of the UMR Géographie-cités will defense his thesis in geography

The last decade can be seen as a time of “crises” regarding borders or, at least, the time of a “come back” of this topic in the European public debate and in state policies. In order to understand how this come back takes place, the thesis focuses on the media coverage of borders in the Western European press. At the nexus of political geography and media studies, I analyse when, where and how the media discourse deals with borders. This approach to discourse through the concept of agenda setting is concerned with the temporal and geographical structures in the mediatisation of borders. It apprehends the discursive regimes of borders over time (2013-2019) and compares them within the European space covered by the corpus (Germany, Spain, France, Italy, United Kingdom).

First, the thesis models the media agenda of borders. In a corpus of online daily newspapers, it studies the salience of the border and its semantic and spatial content using textual and spatio-temporal data analysis methods. It identifies moments of both discursive transition and synchronization between the different national media spheres: these are moments of “crisis” when the representations of borders are reconfigured. Then, the thesis considers the geopolitical role of media discourse on borders during two moments of transition: Ukraine-Russia relationships in 2014 and migrations in 2015. During these discursive sequences the border operates as a geographical object organizing political oppositions (Russia/Ukraine, Migrant/Refugee).