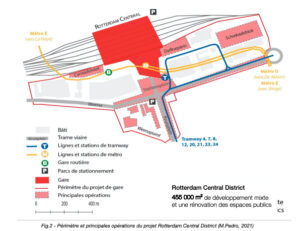 Since a few decades, stations and station areas benefit from a renewed interest in research and public policies in Europe. This interest builds on the development of high-speed lines, but also on a range of urban, institutional, and economic evolutions that converge around the station. It results in the multiplication of stations and station areas renovation projects in European and French metropolises.
Those projects are characterised by their complexity: they take place on an extended yet constraint perimeter, encompassing dozens of hectares beyond the immediate vicinity of stations. They are multidimensional, as they aim at renewing or extending infrastructure networks, renovating entire (brownfield) neighbourhoods and are also part of. metropolitan development strategies. Hence, they put together a wide range of actors that must cooperate despite different motives.
The coexistence of multiple rationales raises questions about the organisation and the outcomes of collective action. Indeed, those large-scale infrastructure and urban projects are often presented as one coherent operation based on a consensus between the different actors.

In this article, Mathile Pedro seeks to go beyond this image and unfold the projects to look at metropolitan station area projects as spaces of tensions and negotiations between different stakeholders. It builds on the notion of “urban project”, which has been developed to describe the shift from a “planning” approach – in which the public authorities were responsible for the making of urban plans – to a collective process associating a growing number of public and private parties in the urban production. Previous works in this field have shown the tension between the communication and the reality of projectsthat appear highly fragmented both in terms of rationales for action and operational set-up.
This article is based on two case studies: Lyon PartDieu project, around the Part-Dieu station in Lyon (France) and Rotterdam Central District, around the central station of Rotterdam (the Netherlands), both being typical examples of station area renovation projects and their complexity. They emanate from a diversity of levers and answer a need for infrastructure and urban renovation and are viewed as a vector of metropolitan transformation. Their comparison highlighted a threefold tension at play in the renovation of metropolitan stations and station areas: tension between an urban and a technical approach of the infrastructure; tension to capture economic value; and tension between a search for distinction and the standardization of metropolitan planning.
Nevertheless, it also illustrates that beyond the metropolitan character associated to central stations and their neighbourhoods, those projects are deeply embedded in their local institutional and economic context. The political and market regulation of those projects thus need to be questioned.

Mathilde PEDRO, a member of Géographie-Cités, is preparing a Ph. D. in planning at the University of Paris I Panthéon-Sorbonne, under a Cifre agreement with the RATP, on the topic: “Designing, planning and managing urban mobility hubs” .

The journal Géotransports, created in 2014 by the members of the Commission de Géographie des Transports of the Comité National Français de Géographie, is a French-language journal of transport geography, online, aiming to highlight the contribution of the geographical and planning dimensions to research questions associating mobility, transport and territories. Geotransport is published twice a year.)

Read (in French) M. Pedro. Beyond the project: Tensions and negotiations in the planning of metropolitan station areas in Lyon and Rotterdam. Géotransports n° 16, octobre 2022, pp. 13-28