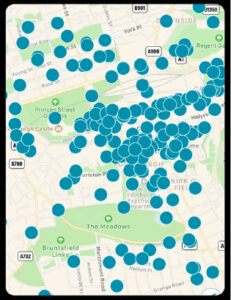 Digital humanities in the city: the case of Curious Edinburgh

This seminar focusses on the Curious Edinburgh project (www.curiousedinburgh.org) as an example of using innovative digital methods to showcase cultural and scientific heritage in the city. As Edinburgh is often characterised as a hotbed of genius, building on its flourishing during the Enlightenment, this project has endeavoured to make this important scientific history visible through a website and virtual walking tour app, which can be downloaded on a mobile phone.

The seminar gives an overview of the (technical) development of the project, the resources used, and give a taster of the tours, varying from history of science, technology and medicine, to brewing, hospitals and public health. As the format allows to tell a variety of stories about the city, we now also cover tours on Edinburgh’s international connections and its vibrant local communities, paying attention to equality, diversity and civic action. Content is sourced from a wide variety of research projects across the University of Edinburgh and community archives, bringing diverse knowledge on Edinburgh together in one space with possibilities to expand to other cities.

French geographers and the city, between scientific problem and public problem. The example of the 1960s.

Contrary to certain preconceived ideas, French geographers have been interested in the city for a long time, as has the use of the term “urban geography,” which can be traced back to the beginning of the 20th century. Consequently, the development and evolution of this sub-field of the discipline, of its scholarly productions as well as its practices, forms a dense history that is indebted to both the general transformations of the discipline and certain specificities linked to the object it studies. A scholarly category, the “city” is also a category of action: during the 20th century, it was regularly constituted as a public problem, taken on by different professional and institutional fields, giving rise to multiple public debates and the implementation of dedicated policies.

This presentation is intended to offer a reading of the history of French urban geography through the prism of this duality of the “city” object. By considering the latter in its dual scientific and cognitive dimension on the one hand, and its practical and political dimension on the other, the aim is to sketch out what the public problem has done to the scholarly problem. More precisely, by focusing on the analysis of the discourses of its practitioners, we will show how the preoccupations of urban geography have been able to resonate with those of the field of urban and planning public action. In particular, we will focus on the 1960s, a period which, in our opinion, crystallizes this tension between scholarly logic and the logic of action.