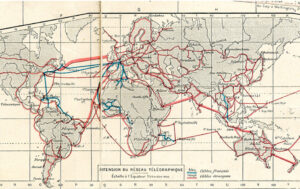 Scholarly controversies, renewal of environmental and geopolitical issues, which he faced in his time, awakening of sensitivities to places, which he himself cultivated: the contemporary context invites us to re-understand the movement of a geographer’s approach. This virtual exhibition is an invitation to discover the facets of a discreet, even secretive and mysterious character according to his contemporaries. As you leaf through the plates, you follow in the footsteps of a great classic of geography, a traveller who was both sensitive and erudite, a scholar who was more interested in culture than politics and curious about the infinite human resonance of the virtualities of places. And several figures can be discerned.
We will certainly find the “Boss”, an innovator and head of school, in his territories in the Latin Quarter, among his colleagues and his students at the École normale and the Sorbonne.
We will recognise the actor-geographer, who not only accompanied the school policy of the Third Republic, from primary school to university, but who was also an expert in international conflicts and territorial reorganisation.
We will discover a modernist geographer, fascinated late in life by the dynamism of the New World and continuously attentive to everything that connects: traffic, the city.
We will meet a witness to this globalisation at the beginning of the 20th century, which includes and goes beyond colonisation alone.
We will see his favourite spaces: France, especially Eastern France, Europe and the Mediterranean.
We will taste the scholarly, sensitive and emotional experience of the field, and the art of the writer-geographer.
This exhibition aims to make him a “passer-by of places”.

Designed by the Epistemology and History of Geography (EHGO) team of the Géographie-cités laboratory, this virtual exhibition presents an updated version of a paper exhibition created for the Saint-Dié-des-Vosges International Geography Festival in 2002 and kept at the Pierre-Noël Museum.

“Figures of a geographer, Paul Vidal de la Blache (1845-1918)” completes the exhibitions and digital sites created at the Bibliothèque interuniversitaire de la Sorbonne (NuBIS), at the library of the École normale supérieure de la rue d’Ulm and at the Bibliothèque nationale de France (BNF) on the occasion of the hundredth anniversary of the death of Vidal de la Blache.

It accompanies a research and development programme for the collections of the French School of Geography (EFG) conducted jointly by the EHGO team and the BIS since 2018.
The Bibliothèque universitaire de la Sorbonne – Bibliothèque de l’Institut de géographie, the BNF, several other libraries and other cultural institutions, universities and research laboratories (including the UMR Géographie-cités), hold collections testifying to the importance of the scientific production and the multi-media devices that this school has developed.
The BNF (with its rich geography collections and its resources on Gallica), the ENS library and the Mazarine library are privileged partners in this programme to promote geographical collections.
This programme includes research into the various laboratory collections, public and private collections concerning the GFE and is open to other collaborations.