13 May 2022|EHGO, Publications, Stability and Fluidity| 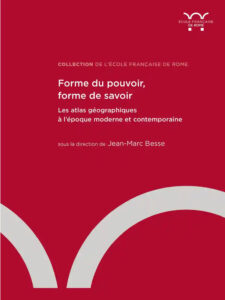 Geographical atlases in the modern and contemporary period

Geographical atlases or the creation of a global and unified image of the world. Among the books that have allowed a new understanding of the world following the discoveries and conquests undertaken by European powers, geographical atlases, since their appearance in Europe at the end of the sixteenth century, have occupied a determining place.
At the same time spaces of graphic experimentation and products of intellectual synthesis, but also objects of prestige and power, they offered their users the image and the narrative of a possible real and symbolic mastery of space. This book aims to study atlases in the history of their production, their transformation, their circulation, as well as their social and political effects.
It also approaches them as a specific editorial form that organizes the visual conditions of knowledge about the world. Geographical atlases are, on the one hand, studied in their political function, that is to say, in the role they played in the exercise of power, in the making of territories, and in the development of political imaginaries. They are, on the other hand, considered in their cognitive scope, i.e. as graphic devices of construction, organization, conservation and transport of geographical knowledge.
Finally, they are recognized as material objects, which are the domain of specific graphic and editorial practices and particular professions (drawing, engraving, printing, bookstores).

This collective work, under the direction of Jean Marc Besse, philosopher and specialist in the history of geographical representations, director of research at the CNRS and member of the Géographie-cités laboratory, brings together the contributions of some fifteen authors.