Public policies and the revalorization of pericentral neighbourhoods, the case of the MIL Campus in Montreal 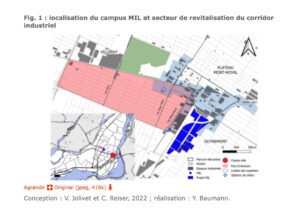 This paper, co-authored by Violaine Jolivet and Chloé Reiser, member of Géographie-cités’ laboratory, focuses on the impacts of major urban projects developed in traditionally working-class and immigrant inner suburbs of Montreal.

Through the example of the MIL campus project, which is part of a revitalisation and international marketing plan for the Montreal metropolis, the objective is to show how the development of new green and creative spaces on former industrial brownfields accelerates gentrification. The argument is that gentrification is seen as a “project” driven by public funding and policies. The paper begins by contextualising pericentral spaces, showing how they have shifted from ‘“in-between” and disinvested spaces in the 1970s and 80s to new metropolitan centralities in Montreal. The paper then examines the role of different public actors in the implementation of this urban revitalisation project and demonstrates how the MIL project accelerates the gentrification of pericentral immigrant neighborhoods such as Parc-Extension. Then, the role of the university as a public actor is questioned in this specific case study around the implementation of the new campus. Finally, the paper demonstrates how the principles of sustainable urbanism and the creative city, widely promoted by public actors, contribute to the legitimisation of gentrification by public policies.

Chloé Reiser is a post-doctoral researcher at the University of New Brunswick (Saint-John, Canada). Her research topics include: residential trajectories and strategies; immigration and diversity in urban areas; social and community housing; social movements and collective action; public policy and urban governance; intersectionality and gender studies.