Mobiliscope – Cities around the clock

Mobiliscope – Cities around the clock 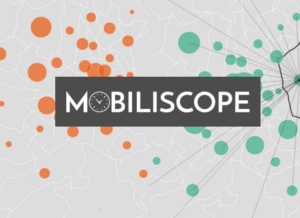 Description: Places are not the same at night and during the day : people move daily and make changes in neighbourhoods densities and their social structures. Mobiliscope is a geovisualization platform to explore how areas and segregation change over a 24 hour period.

While social scientists have invested a lot of energy in exploring the uneven distribution of social groups in the city (ie. segregation), they have surprisingly limited their efforts to investigating the social composition of the residential population. Rather than considering neighbourhoods as necessarily frozen over a 24h period, we aim to explore areas and segregation not only from a residential (“night-time”) perspective but also with a daycourse perspective.

Hourly people’s locations are issued from large public transportation surveys and implemented into the Mobiliscope platform. From maps and graphs users can explore how cities and segregation change around the clock. Present populations can be quantified and qualified according to their demographic and social profiles, as well as the nature of their activity and their last mode of transportation.

Mobiliscope can be used as a planning tool by public actors and local authorities wishing to act “in the right place at the right time”. It is also a scientific tool for researchers and an pedagogical tool for teachers.

The Mobiliscope is an open tool. The source code is given under the terms of the AGPL license. Aggregated French datasets are downloadable and reusable as long as they remain under ODbL license and the sources are mentioned.