New in the Encyclopedia SCIENCE

New in the Encyclopedia SCIENCE 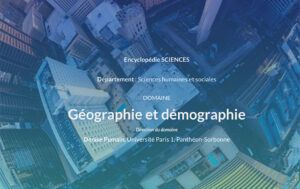 The Encyclopedia of Science published by the scientific publisher ISTE-Wiley, whose first volumes were released in September 2020, aims to draw up the state of knowledge of science and technology, as well as the issues and controversies related to them. The Encyclopedia SCIENCES is organized into scientific fields, each divided into defined themes. Denise Pumain, professor emeritus member of geography-cities, directs the field “Geography and demography”.

Geography studies the effects of unequal distribution of resources and proximity on economic development and technical arrangements of the earth interface. It models inequalities at all scales in the world and modulates various forms of interaction according to physical environments, cultures and territories of societies. With the exploitation of geolocalized data, the theories and models of spatial analysis structure numerous applications for the explanation, simulation and visualization of geographic information.

To learn more about the encyclopedia of science

Here are the latest releases in the field of Geography and Demography:

Population and Development Issues analyzes the relationships between key demographic variables and major development issues. This book offers a simple and clear presentation of empirical data combined with theoretical reflections on the implications for development, whether it be education, employment, health, inequality or climate.

After reviewing the dominant demographic theory, known as demographic transition, Demographic Dynamics and Development presents a comprehensive study of aging, fertility, contraception, nuptiality, mortality, and migration, which are at the heart of the changes. Each issue combines the most recent empirical data with theoretical reflection on the implications for development.

Risk and the Anthropocene

The spatial impacts of climate change

This book presents a review of the spatial impacts of contemporary climate change, taking a multiscalar and systemic approach. Beyond the facts (temperature rise, changes in the spatial distribution of precipitation, etc.), it also analyzes the geopolitical consequences in the Arctic and Central Asia, changes in Mediterranean crops and viticulture on a global scale, as well as the impacts on the distribution of living organisms.