23 May 2022|Mobilities and Territories, PARIS, Publications|

The role of the perceived cartographic distance

This article focuses on the cartographic representation of globalization in the form of international exchanges and flows observed at the world level. 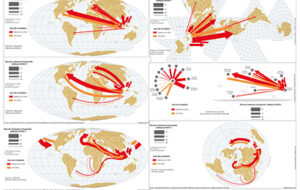 Françoise Bahoken is interested in the meaning of these world maps, in the patterns they show to describe a relational geography of globalization. The proposed approach is theoretical and methodological. It focuses on the role of geographic space, a strong variable in the structuring of global exchanges that does not a priori play a role in their representation. However, taking it into account leads to a strong variation in the map, and consequently modifies the qualitative interpretation that can be made of the phenomenon represented.

Mapping globalization at the world level has characteristics linked to the theme of the map (migratory flows, trade flows, etc.), but also to its geography: to the choice of entities (places, pairs of places, their relationships, etc.), to the projection system, to its framing, to the type of exchanges. Also to the methods implemented and the tools mobilized (not mentioned here). These choices generate the manifestation of graphic effects specific to the World such as an alignment effect, an itinerary effect and/or a joint effect that must be articulated as well as possible to form the desired image.

The attention is thus focused on the notion of “perceived cartographic distance” through the drawing of the flow line on the map. The author shows the fundamental character of this notion specific to origin-destination flow maps, which she had introduced in her thesis: “Contribution to the mapping of a flow matrix” to distinguish them from movement maps. In connection with the available information to be mapped, she shows the role of spatial criteria in the perception of this cartographic distance by illustrating it with an example. The case of application is that of international trade flows of Asian origin which are the object of a multi-mapping exercise.

Françoise Bahoken is a researcher in Geography at the Gustave Eiffel University (ex. IFSTTAR), since 2016. She defended in January 2016 a PhD thesis in geography/territorial sciences at the UMR Géographie-Cités/équipe PARIS, in parallel with her professional activity as a cartographic engineer.
She is interested in the theoretical and methodological aspects of the cartographic construction of flows and movements observed in geographic space. Her approach is part of a critical deconstructionist approach to (thematic) statistical cartography, in particular that which concerns international global phenomena. She participates in the development of innovative tools for the analysis and geo-visualization of territorial interactions through origin-destination flows (see in particular arabesque), particularly of the migratory type (see in particular MigrExplorer).