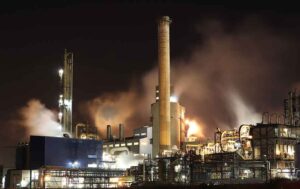 An article in the French newspaper Le Monde, published on Wednesday, October 20, entitled “Climate Change: How Total and Elf have helped sow doubt for decades”, brings to light a study published by two historians and a sociologist in the scientific journal Global Environmental Change. The study shows that Total Energies, although aware of the risks as early as 1971, cast doubt on the scientific data that threatened its activities.

This study, based on new archival research and first-hand interviews, describes how Total and Elf (the two companies merged in 1999) have responded to the changing climate science and policy over the past 50 years.
Researchers Christophe Bonneuil (Centre de Recherches Historiques, CNRS & EHESS, Paris Sciences et Lettres, Paris, France), Pierre-Louis Choquet (Centre de Sociologie des Organisations, SciencesPo, Paris, France) and Benjamin Frantac (Department of History, Stanford University, Stanford, CA, United States) show that Total staff received warnings about the catastrophic global warming potential of its products as early as 1971, became better informed on the subject in the 1980s, and began to doubt the scientific basis for global warming in the late 1980s, eventually adopting a position in the late 1990s of publicly accepting climate science while promoting the postponement of fossil fuel control policies. This is one of the first longitudinal studies of a major fossil fuel company’s responses to global warming, describing the historical stages of awareness, preparation, denial, and delay.

“Atmospheric pollution and climate”: the article by François Durand-Dastès at the center of the investigation

The research of Christophe Bonneuil, Pierre-Louis Choquet and Benjamin Frantacwas sparked by their discovery of direct proof of Total’s awareness of climate science in 1971. In that year, the company’s magazine, Total Information, contained an article entitled “Atmospheric pollution and climate” written by by François Durand-Dastès, a geographer specialized in climate change, professor emeritus and member of the Géographie-cités laboratory. The article stated:

“Since the 19th century, humans have been burning increasing amounts of fossil fuels. This results in the release of enormous quantities of carbon dioxide […] The overall amount of carbon dioxide present in the atmosphere, therefore, has increased significantly. […] The increase has been around 15% over the last 150 years, which is not negligible. And […] if the consumption of coal and oil keeps the same rhythm in the years to come, the concentration of carbon dioxide will reach 400 parts per million around 2010 […]”. “This increase in concentration is quite worrying […] carbon dioxide plays a large role in the thermal balance of the atmosphere […] air richer in carbon dioxide absorbs more radiation and heats up. It is possible, therefore, that an increase in the average temperature of the atmosphere is to be feared. The calculated orders of magnitude are obviously small (from 1—1.5 ◦C) but could have important impacts. Atmospheric circulation could be modified, and it is not impossible, according to some, to foresee at least a partial melting of the polar ice caps, which would certainly result in significant sea level rise. The catastrophic consequences are easy to imagine.”
F. Durand-Dastès. Atmospheric pollution and climate. Total Information 47, 1971, p. 12-19.

Finally, as Le Monde points out, it was not until the mid-2000s that Total “truly recognized the ‘seriousness’ of the IPCC reports and organized a conference on climate change.