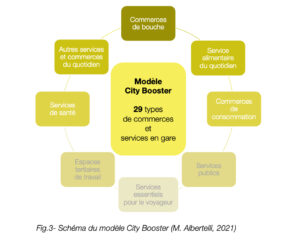 In this article, Marion Albertelli proposes to examine the characteristics and possible application throughout France of a new French metropolitan railway station model developed by the SNCF group based on the open station model of the early 20th century, named by P. Ropert (Director General of SNCF Gares & Connexions from 2014 to 2019) in 2017 “City Booster”.

This model, whose reference station is the Parisian station Paris Saint-Lazare, is based on the objective and analysis that the station is now a public space where the city has entered (Joseph, 1999), and which must be connected to the territory at different levels: national through the rail network, regional in its role as a major connector, and metropolitan in the services it offers to the city and its neighbourhood.

The results presented in this article are clear. The City Booster station has little territorial reality, being limited to five Parisian stations. It has therefore not “emerged” from the cradle where it was born: even though it is part of the logic of metropolisation, its real objectives are purely economic and mainly centred on the financing needs of the SNCF’s rail activity. The very basis of this economic model, which is based on flows, does not seem to allow for its implementation, especially in a context where saturation is becoming a major issue for these major urban connectors. Far from being a new stage in the evolution of the open station, the City Booster station closes on different levels. The first is the functional level, with the reappearance of secure controls on possession of a ticket for access to platforms and trains, but also with the specialisation of services around consumer shops, taking little account of urban issues other than economic ones. The second is a social closure: the overwhelming presence of franchised shops, and the progressive integration of high-end, even luxury, shops and spaces dedicated to nomadic workers, address the station to social classes with high economic and cultural capital. The third level, finally, is political and economic: as a piece of the city responding to the challenges of territorial competitiveness, the City Booster station turns its back on its role as a “gateway to the city” to address a minority of users-consumers of the station. It is therefore only a ghost of the imaginary “cathedral of humanity” and agora that gave rise to it.

Marion Albertelli is doing her thesis in the Géographie-Cités laboratory in partnership with SNCF Gares&Connexions (CIFRE grant). Her work focuses on the service station model and its adaptation to new metropolitan issues, both functional and in terms of use. Marion Albertelli studies three axes: the evolution of the station and its place in the city; the physical and local place of the station through its accessibility and intermodality, which are key issues in its connections with the city; the impact of new mobility practices on the station, its facilities and its operation.