Coming into the world: sociogenesis of children’s manners of representing the global space 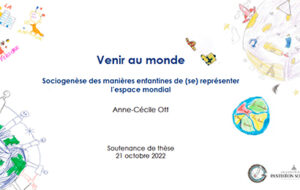 Anne-Cécile Ott, doctoral student at the University of Paris 1 Panthéon-Sorbonne and at the Géographie-cités laboratory, will publicly defend her thesis in geography, under the direction of Clarisse Didelon-Loiseau,

The defense will be followed by a drink, Bâtiment Recherche Sud.

At the intersection of social and cultural geography and sociology of childhood, this thesis investigates the social genesis of the representations of the world produced by children. While children are actors seldom considered by French-speaking geographers, the world is more widely ignored in the geographies of children. By analysing how young children represent the world and why they represent it one way rather than the other, this research aims to fill those two voids. It is based on a field survey led in four Parisian elementary schools with contrasting social profiles, with 248 children from different age groups. A multi-methodological protocol was developed around four activities: drawing, a whole-class brainstorming session, a task test (the children were invited to create an illustrated planisphere) and small group interviews. It shows that the world is represented by children with a diversity of meanings and scales, from local to global. These representations reveal that they produce (geo)political discourses by interlinking and hierarchising spaces, but also through the questioning of global issues. Children’s ways of making worlds are influenced by the educational institution, which explains convergent effects. However, at equal age, distinctions can be observed based on socialisation within the family, through the media, and peer exchange. Representations of the world thus function as a laboratory for observing socialisation in the making: the socialisation of children to and through the world creates and reinforces the domination-based relationships that structure the social world.