Places, levels and dynamics of tourism in Iran

As a pluralist political tool, tourism can be the origin of ideological tensions related to practices and places invested by it. Thanks to a geographic approach, Camille Dabestani, focuses in this paper on spatial structures of touritification in Iran, based on the results of his Master’s thesis.

The study on the scale of the province of Isfahan has made it possible to consider its system of tourist places, the practices that construct them and to bring out the spatial structures. The latter reveal the political issues underlying the development of tourism in the region, but also in the country, illustrated by three processes. First, ideological, the first shows the crystallization of identity and cultural tensions around heritage references related to the pre-Islamic and Islamic history of Iran, such as the opposition between Esfahan and Shiraz. This heritage, thus chosen, is promoted and integrated into the global tourism system by national and international institutional tools. Finally, despite a radiance of attractiveness, the polarization of domestic and international tourism development around the main urban centers of the region is done to the detriment of peripheral areas.

The Iranian national tourist destination is driven by a vertical development, conceived by a State for which tourism has an increasingly important ideological and economic role. By seizing national and international institutional tools, the Iranian state gives sight to places and a chosen heritage, seeking to integrate them in a controlled way, according to its ideology, into the world tourist system. This control tends to limit regional and local tourism development outside the main urban centers of a country with major tourism potential. 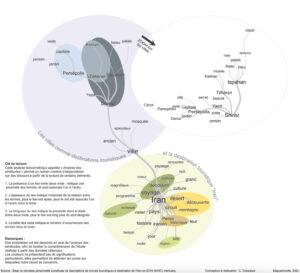 Camille Dabestani is a doctoral student under contract at the UMR Géographie-cités. Her research focuses on the construction of macro-regional imaginaries and on the regionalization of (ultra)peripheral spaces. She analyzes the spatial practices and representations of various actors at the macro-regional level (students/institutions/researchers), particularly in the French context of the Hexagon and the Caribbean. Her thesis is under the supervision of Clarisse Didelon-Loiseau and is part of the ANR-DFG Imageun project.