Trade-offs between sustainable development goals in systems of cities

Trade-offs between sustainable development goals in systems of cities 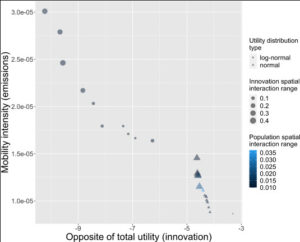 In this article, published in the Journal of Urban Management, Juste Raimbault and Denise Pumain, members of the Géographie-cités laboratory, show that there is no single urban optimum, but a diversity of regimes forming a compromise between contradictory sustainable development objectives.

Sustainable Development Goals are intrinsically competing, and their embedding into urban systems furthermore emphasises such compromises. When observed at the scale of systems of cities, such concern is considered as a series of innovations that challenges the adaptive capacity of urban systems. The spatial complexity, the non-optimal nature of such systems, and the multiobjective aspects of their agents, are among the reasons that raise difficulties when trying to adjust local policies through promoting innovation in order to satisfy at least a couple of SDGs simultaneously.

As we lack enough empirical evidence, we propose in this paper to use a stylised simulation model for systems of cities, focused on innovation diffusion and population dynamics, to show how trade-offs may operate at such a scale. We proceed in particular to a bi-objective optimisation of emissions and innovation utilities, and show that no single urban optimum exists, but a diversity of regimes forming a compromise between the two objectives.