16 September 2022|Calendar, EHGO, In the spotlight, Mobilities and Territories, PARIS, Stability and Fluidity| 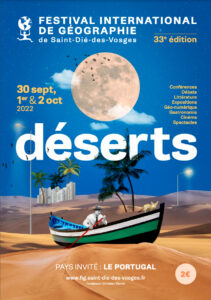 The international festival of geography of Saint-Dié-des-Vosges will take place on September 30, October 1 and 2, 2022 and will give to think about the theme “Deserts”. Several members of the Geographie-Cités laboratory are participating in this 33rd edition.

Understanding the war in Ukraine through its geography.

Ivan Savchuk, former researcher at the National Defense University of Ukraine, located in Kyiv, is an expert in economic geography. He is currently pursuing his research in France, at the Géographie-cités laboratory. He participates in the Franco-German program Limspaces (2021 – 2024).

with Pascal CLERC, Federico FERRETTI, and Philippe PELLETIER, geographers Patrick MINDER, historian-geographer.
The Forum will address the control of colonized territories, and then explain how anarchist geographers have addressed this issue. Then, we will head to the arid Northeast of Brazil (Sertão or Great Desert) before a time of debate. This is a chance to rediscover the richness and plurality of traditions.

Federico Ferretti is a professor of geography at the Alma Mater Studiorum – University of Bologna and an associate member of the Geography-Cities laboratory.

The sea is a desert, with Camille Schmoll

Meeting moderated by Étienne AUGRIS, History-Geography teacher and author for the Eléphant, with :

Who are these new damned of the Mediterranean Sea who perish dramatically by the hundreds by piling up on makeshift boats? The causes of their migration are multiple and often combined: fleeing war, escaping repression, dictatorship or persecution, leaving lands made uninhabitable by the consequences of climate change… How do the media look at this drama? Why is the view so different from the one given to the boat people in the 1970s?

Camille Schmoll, Director of Studies at EHESS and member of Géographie-cités, is the winner of the 2022 Geography Book Prize for high school and university students for her book “Les damnées de la mer”.

Download the program of the Saint-Dié International Geography Festival